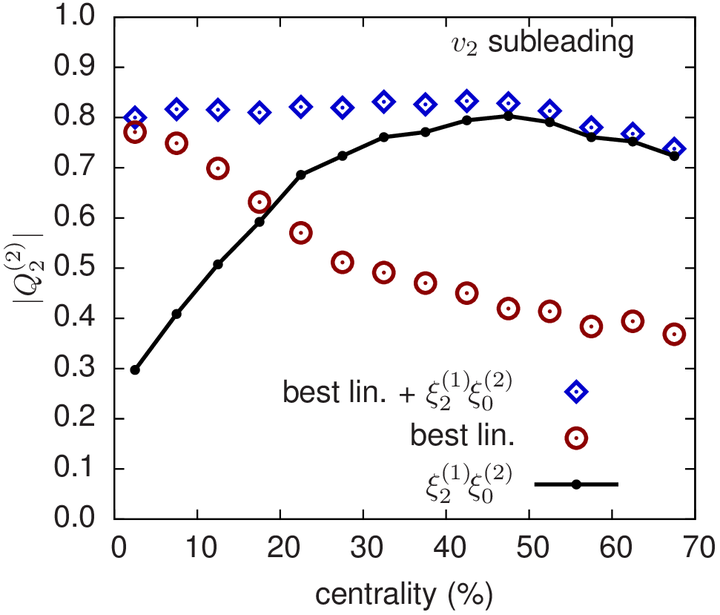 We analyze the spectrum of harmonic flow, vn(pT) for n=0–5, in event-by-event hydrodynamic simulations of Pb+Pb collisions at the CERN Large Hadron Collider (sNN=2.76TeV) with principal component analysis (PCA). The PCA procedure finds two dominant contributions to the two-particle correlation function. The leading component is identified with the event plane vn(pT), while the subleading component is responsible for factorization breaking in hydrodynamics. For v0, v1, and v3 the subleading flow is a response to the radial excitation of the corresponding eccentricity. By contrast, for v2 the subleading flow in peripheral collisions is dominated by the nonlinear mixing between the leading elliptic flow and radial flow fluctuations. In the v2 case, the sub-sub-leading mode more closely reflects the response to the radial excitation of ɛ2. A consequence of this picture is that the elliptic flow fluctuations and factorization breaking change rapidly with centrality, and in central collisions (where the leading v2 is small and nonlinear effects can be neglected) the sub-sub-leading mode becomes important. Radial flow fluctuations and nonlinear mixing also play a significant role in the factorization breaking of v4 and v5. We construct good geometric predictors for the orientation and magnitudes of the leading and subleading flows based on a linear response to the geometry, and a quadratic mixing between the leading principal components. Finally, we suggest a set of measurements involving three point correlations which can experimentally corroborate the nonlinear mixing of radial and elliptic flow and its important contribution to factorization breaking as a function of centrality.